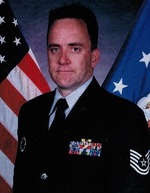 Arthur “Art” Newman, 54, a resident of Nebraska and former Calumet resident passed away on Sunday August 16, 2015 at the V.A. Health System in Nebraska.

He was born on November 29, 1960 in Calumet a son of Gordon and Virginia (Cuber) Newman.

He graduated from Calumet High School with the class of 1980.

Art’s career was in the United States Air Force where he taught Airmen Leadership School and served as a First Sargent. He served his country for over 24 years and was stationed in California, Spain, North Dakota, Arizona, and finally Nebraska where he retired in 2008.

Art enjoyed the outdoors, fishing-camping, and was an avid train enthusiast.

Surviving are: His Wife Mary Ann

A funeral service will be held on Thursday August 20, 2015 at 6:00 PM in the Erickson Crowley Peterson Funeral Home in Calumet with Pastor Tony Laidlaw to officiate.

Visitation will be from 4-6 PM on Thursday at the Erickson Crowley Peterson Funeral Home Funeral Home.

Burial with military honors will be in the Lake View Cemetery at 9 AM Friday August 21, 2015.

In lieu of flower please send donations to the Lymphoma Research Foundation at Lymphoma.org.