In Memory of
Steven Nehemiah "Hieromonk Nicholas"
Glenn
1945 - 2017
Click above to light a memorial candle. 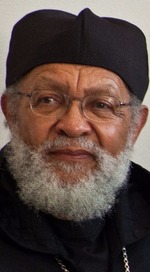 
Hieromonk Nicholas, Hegumen of Holy Transfiguration Skete in Eagle Harbor, passed away quietly at 11:30 a.m. on Friday, May 26th after a severe illness of nearly two years duration.

The future hieromonk was born Steven Nehemiah Glenn on August 8, 1945 in Ann Arbor, Michigan to Nehemiah and Zorabell (Richardson) Glenn of Ypsilanti, Michigan. He attended public elementary and secondary schools in Ypsilanti, graduating from Ypsilanti High School in 1963. He attended the University of Michigan’s School of Music, attaining a Master’s Degree in Music Performance (Choral Conducting) in 1968. He subsequently taught voice and conducted choirs at Central State University in Wilberforce, Ohio, and Lincoln University in Jefferson City, Missouri. Returning to Michigan in 1971, he taught music in the St. Clair Shores and Detroit public schools, served as Artist in Residence at Wayne County Community College, and as music director at Holy Redeemer and St. Agnes Catholic Churches.

Known for his vision and leadership abilities, he was adept at organizing music performance groups. While still in High School, he conducted the Junior Choir of his church in Ypsilanti. During his time in Detroit he organized and conducted in numerous performances the Detroit Schola Cantorum and Orchestra Detroit with annual performances of Handel’s Messiah at Orchestra Hall. He also founded and, for several years, directed the Rosa Parks Community Arts Center in Detroit.

In 1983, he embraced monastic life, moving to Eagle Harbor and establishing the monastery, which he guided for 33 years until his passing.

His body will lie in state at the monastery church where the All Night Vigil for the deceased (Parastasis) will be sung at 5:30 P.M. on the evening of Wednesday, May 31st, with visitation afterwards. The Departure Office for Monks will be sung at 10:00 A.M. on Thursday, with subsequent burial in the monastic cemetery. The public is invited to attend either Service

To send flowers to the family or plant a tree in memory of Steven Nehemiah "Hieromonk Nicholas" Glenn, please visit our Heartfelt Sympathies Store.