In Memory of
Kenneth
Thompson
1936 - 2018
Click above to light a memorial candle.
Memorial Candle Tribute From
Erickson-Crowley-Peterson Funeral Home
"We are honored to provide this Book of Memories to the family."
View full message >>>
Send Flowers
Menu 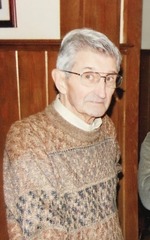 Kenneth R. Thompson, 81, of Rabbit Bay, passed away on Monday, January 29, 2018, at the D.J. Jacobetti Home for Veterans, in Marquette, where he has been a resident since August 2017.
Kenneth was born on March 30, 1936, in Copper City, son of Rudolph and Martha Thompson.
In high school, Ken was an excellent baseball player and was a member of a U.P. All-Star team that played 10 games in lower Michigan, including at Tiger Stadium. Upon graduation from Calumet High School in 1954, Ken enlisted in the U.S. Army with his childhood friend, Jon Kytta. Ken served as a radio operator in Germany and was honorably discharged in 1962.
Ken received his undergraduate degree in secondary education from NMU, and his Master’s and Education Specialist degrees from Wayne State University. He taught middle school social studies and coached football in the Mt. Clemens school system from 1960 to 1987, when he retired back to his native Upper Peninsula, on Rabbit Bay. Ken was active in the Calumet All School Reunion Committee for many years. He enjoyed fishing, hunting, coin collecting and running the neighborhood football pool.
Ken is preceded in death by his parents and his brother, James. He is survived by his sister, Marilyn Knaresboro (Phoenix, AZ); nieces and nephews, Vickie Delaney, Donald Delaney, and Scott Delaney (Phoenix, AZ); Steve Thompson (Maryville, TN); Rebecca Russo (Grand Rapids, MI); Pattie Ismond (Ada, MI); Scott Thompson (Chicago, IL); Cindy Thompson (Seattle, WA); Kevin Thompson (Temecula, CA); and Karen Thompson (Marquette, MI); 16 grandnieces and nephews, and several cousins.
A private funeral service will be held. A spring burial will take place at the Lake View Cemetery.
Donations in Ken’s name can be sent to CHS - SHHS All School Reunion Scholarship, in care of Gene LaRochelle, 815 Scott Street, Calumet, Michigan, 49913.
The family would like to thank the staff at the Jake for their compassionate care for Ken.
Online condolences for the family may be left at www.ericksoncrowleypeterson.com
The Erickson Crowley Peterson Funeral Home in Calumet is assisting the family with the arrangements.

To send flowers to the family or plant a tree in memory of Kenneth Thompson, please visit our Heartfelt Sympathies Store.