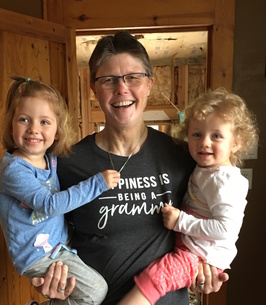 Condolence From: Eric Monberg
Condolence: Terry stayed with our family for a week in Princeton, NJ while she was competing (and winning) in the Senior International rowing trials. Her enthusiasm and outgoing nature were readily apparent. Just yesterday I wore the MTU Crew polo shirt she gave me. I was touched by the program that she and the late Tom Greenleaf (Hancock Bike Shop) set up where they would solicit used bicycles, restore them to working condition, and give them to needy children. This epitomizes Terri; helping others, organizing good works and getting people involved in healthy activities. We need more terrys!

Eric Monberg
Monday June 10, 2019
Share on Facebook
Condolence From: Sara (Roggemann) Keller
Condolence: Terry was such a huge personality and it was always a pleasure to cross paths with her when I lived in the upper peninsula. She was my inspiration for getting back to indoor rowing and I'm so very sorry to hear about her passing. She will be greatly missed.
Wednesday December 12, 2018
Share on Facebook
Condolence From: Don Savera
Condolence: Terry was always helpful and considerate of all my needs when I exercised at that fitness center on Sharon Avenue in Houghton. I looked forward to our morning chats. She was an inspiration and a great advocate for fitness. A great role model for all of us. Additionally, I was a volunteer each year since about 2001 at the Copperman Triatholan. There, too, she was inspiring to all the participants and volunteers and ran the event with infectious enthusiasm. A great lady, she is missed by all who new her. My condolences and prayers go out to all family.

Don
Thursday December 06, 2018
Share on Facebook
Condolence From: Eric Monberg
Condolence: Terry and her rowing partner stayed with my wife and I in Princeton, New Jersey when she competed in the International Rowing Masters competition. I grew up in the Copper Country and we were put in contact through a mutual friend. Her enthusiasm and appetite for life and food were immediately apparent and we only wish they could have stayed longer. Years later, on a trip back to Hancock I met with the Smythes at a BBQ where she described a program that she and Tom Greenlee of the Hancock Bike shop had started where they rehabbed bikes for needy children. This was Terry in a nutshell; always thinking of others and owner of an infectious enthusiasm that caught up those around her. She was one of a kind and won't be forgotten. I think of her every time I wear my MTU crew shirt that she gave me.
Tuesday December 04, 2018
Share on Facebook
Condolence From: Anna Guzdzial
Condolence: Terry was a huge support for Special Olympics and brought the rowing event to summer and winter games! Her determination to help people be healthy has made a huge impact for our athletes ! Sincere condolences for the huge void in our lives with the loss of Terry.
Tuesday December 04, 2018
Share on Facebook
Condolence From: Shirley McArthur
Condolence: The McArthur Family send their condolences to Phil and Terry's extended family. Our heartfelt sadness on her shorten life.
Monday December 03, 2018
Share on Facebook
Condolence From: Frank and Roberta Yoerg
Condolence: Terry brought so much enthusiasm to every aspect of her life. It was so apparent in how much drive she exhibited in everything she was involved with-I especially had fun with the spinning challenge. Her smile and zest for life will forever be missed and my heart breaks for Phil and his family.
Friday November 30, 2018
Share on Facebook
Condolence From: Terri Capello
Condolence: Phil and Family, So very sorry for your loss. Thoughts and prayers are with you . Terri Capello
Friday November 30, 2018
Share on Facebook
Condolence From: Kimberly Pici
Condolence: When I moved to the Keweenaw almost 16 years ago, I first met Terry though our jobs at what was then Keweenaw Memorial. When I learned she was involved in rowing I was so excited as I had rowed when I lived downstate. She welcomed me to the hospital and community with open arms. Her drive and ability to make anyone feel they could accomplish whatever they wanted to was something I always admired. She made anyone , at any stage of their fitness journey feel unstoppable. I am glad that I got to sit and talk with Terry and her sister several weeks ago. She was driven right until the end, telling about donating her body to science so this awful disease could be researched.

You taught us so much Terry , right until the end. You will be missed Terry...
Friday November 30, 2018
Share on Facebook
Condolence From: Sandra Gayk
Condolence: I first met Terry at the fitness center where she designed a program for me to follow to improve my physical strength. Her encouragement, enthusiasm, and nonjudgmental attitude inspired me to commit to fitness. I looked forward to seeing her smiling face and her greeting me as "Olive" when I went to work-out. I am so sad to learn of her passing. My heartfelt sympathy to Phil and her family.
Thursday November 29, 2018
Share on Facebook
Print All