To share your memory on the wall of Kurt Kitti, sign in using one of the following options:

Provide comfort for the family of Kurt Kitti with a meaningful gesture of sympathy.

Print
Kurt Jay Kitti, 62, passed away peacefully on Tuesday, May 14th, 2019, at his home in Traprock Valley surrounded by his family, after living with cancer for two years.

He was born February 3rd, 1957, in Laurium to Walt & Ina Kitti. A 197... Read More
Kurt Jay Kitti, 62, passed away peacefully on Tuesday, May 14th, 2019, at his home in Traprock Valley surrounded by his family, after living with cancer for two years.

Kurt served for 20 years as an officer in the United States Air Force, commissioning in April 1986 and retiring as a Lt Colonel in September 2006. Highlights of his service include Distinguished Graduate of Officer Training School, two Masters of Science degrees, Deputy Program Manager: Alaska Radar System, Deputy Chief: Logistics Policy Branch for NATO at SHAPE Belgium, squadron commands for Logistics Support and Maintenance, Deputy Chief: Innovation & Technology Division, and the joy of traveling the world with his family.

Following retirement, Kurt became a consultant to the Deputy Assistant Secretary of the Army for Science and Technology. He transitioned to the federal government as a U.S. Army civilian working in the Program Executive Office for Enterprise Information Systems, serving as the Chief of Policy Reporting and Cost Analysis Division.

Kurt “retired” to his home in Traprock in March 2015. He enjoyed an active life, always exercising body and mind. A lifelong learner and passionate about the sciences, he enrolled at Michigan Technological University where he studied Sports and Fitness Management and Psychology. Kurt relished spending time with his family. Hiking, mountain biking, xc skiing, swimming in Traprock and beach time on Lake Superior were among his cherished pastimes with those he loved. Always the optimist, he thrived on motivating and encouraging others. He radiated energy and enthusiasm; was a teacher, leader, and inspiration to many. Kurt had a zest for life and embodied the true spirit of Sisu.

He was preceded in death by his parents, Walter and Ina Kitti, two brothers, Christopher and Mark, and sister, Marcia Nichols.

Special thanks to the nurses, doctors, and staff of Aspirus Keweenaw Hospital, Oncology, Infusion, and Aspirus at Home for your outstanding level of care and compassion.

A private celebration of life will be held later in the summer.

Memorial donations may be made to the Mayo Clinic or the Keweenaw Health Foundation. Please consider giving the gift of life by donating blood.


The Erickson Crowley Peterson Funeral Home is assisting the family with the arrangements. Online condolences can be left for the family at www.ericksoncrowleypeterson.com
Read Less

There are no events scheduled. You can still show your support by sending flowers directly to the family, or planting a memorial tree in memory of Kurt Jay Kitti.
Plant a Tree

We encourage you to share your most beloved memories of Kurt here, so that the family and other loved ones can always see it. You can upload cherished photographs, or share your favorite stories, and can even comment on those shared by others.

Posted May 24, 2019 at 04:27pm
To Kurt's brother, Paul,
Dear Paul,
You have my heartfelt sympathy in the passing of your dear brother, Kurt.
May our Lord give you peace & comfort at this sad time & in the coming days. I will remember you & your family in my prayers.
You have many cherished memories that will stay with you always. Also, many dear friends & family will help you through this time of sadness. Our Dear Heavenly Father promises us that He will never leave us or forsake us. Be comforted by His promise.
Mary Anne Storm, Lake Worth, Florida

Posted May 20, 2019 at 12:24pm
Dearest Kelly and family,
With deepest sympathy as you remember and celebrate Kurt. Your love for him radiated across facebook, as we lived so far away and couldn't share time together. I look at your pictures of your life together and though days were numbered, you lived them to the fullest with great love. Hugs and prayers to you Kelly.

Posted May 18, 2019 at 08:55pm
Dear Kelly,
I haven't seen you since our last class reunion, but know that you were always a special friend, beautiful inside and out. I am so very sorry for your loss. May the Lord comfort you and your family during this sad time.
Love,
Denise Poisson Cormier
Comment Share
Share via:

Denise, how do I contact you? Are you on facebook? My email is: monalisasmiles83@gmail.com. Please reach out!--Mona
RJ

Posted May 18, 2019 at 11:23am
Kurtty and I did a lot of hanging around when we were in high school. Since then we had an occasion to visit, but as you know, family and life takes us in many different directions. I will share some of my fondest memories of our early years we shared together. Kurt and I would visit at his house in Calumet where he introduced me to tacos, which I never heard about, that they were having for supper. He didn't even charge me for them even though he charged his brother for a piece of frozen pizza once when we were having that once. We would usually do something active, at Kurt's prompting, like throw the football, play tackle football in the winter, pump some iron ( he could always outlift me ). When they moved to Traprock, we would spend hours at the river throwing horseshoes, swimming, fishing, exploring. I remember the times I was busy talking football with my mentor, Kurt's dad Walt, at the kitchen table when Kurt would get tired of waiting for me and he would just take off and after a couple of hours I would have to go find him. We spent late nights in the tent in their front yard, staring at the starry skies, seeing all kinds of celestial features and wondering what they were. Kurt was impressed when he came over my house to eat in between football practices and I offered him a pound of hamburger that I would cook in sautéed onions, no bun, in a fry pan. We would occasionally go to the store where he would buy himself a T-bone steak to cook to eat. I usually stood on his starting blocks when he was about to run the 100 yd dash in track and I would try to pump him up to get a good start. One incident we recollected recently was when we went to Bucky's shoreline in the springtime. There was this wall of ice along the shoreline and we were curious to see how far the wall was undercut by the waves. So, we both were peeking over the edge of the ice wall at the same time when the chunk we were standing on broke loose. Down we went, but like a couple of synchronized swimmers we spun around, grabbed the edge of the ice wall and pulled ourselves up. Kurt had different type of humor and he liked to play on words, puns and double meanings. We laughed a lot and enjoyed each other's company. He would always mention his deep love for his family and strong faith in Jesus and I appreciate his friendship and companionship throughout the years. We will miss Kurt and look forward to seeing him again.
Comment Share
Share via: 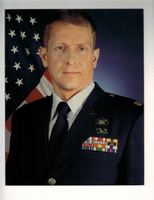 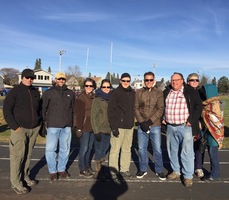