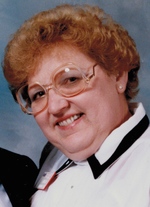 Bertha Anderson, a resident of Calumet, passed away on July 27, 2019 at the Omega House.
Bertha was born on June 9, 1935 in Fulton location. Bertha is the daughter of the late Adolph and Mathilda Kanniainen.
After graduating high school, she moved to the Detroit area and was employed for 10 years at Sears and Roebuck in the Livonia Mall. She retired from Detrex Corporation after 15 years of service and moved back to Calumet.
On May 11, 1957 she was united in marriage to Wesley (Kenneth) Anderson at the Bethlehem Lutheran Church in Detroit. He preceded her in death on November 7, 1995.
She was also preceded in death by her son, Bruce, parents and eight sisters: Alida (Clarence) Green, Julia (Russell) Nordstrom, Bernice (Henry) Jenkins, Lillian (Urho) Torro, Ellen Voelker, Lorraine (Gordon) West, Shirley (Roy) Hendrickson, and Martha Koski; along with two brothers: Melvin and Reuben Kanniainen.
She was a member of the Faith Lutheran Church in Calumet; a life member of the Finnish Center in Farmington, MI; a past member of the Women of the Moose in Brighton, MI; the Keweenaw Memorial Hospital Auxiliary and the Copper Island Divas of the Red-Hat Society.
Surviving are her son Brian (Josette) Anderson, of Calumet and grandchildren: Martin and Brianna, Shawna, Alicia, Brian, Kacey, Aaron and Brandon. Along with her sisters-in-law: Barbara (Jack) Briskey, Betty Standford, and Debbie Anderson and brothers-in-law: Dale Koski and John “Pudy” Voelker. Also surviving is her special friend Cheril Stahl and numerous great grandchildren, nieces, nephews, cousins and friends.
A funeral will be held at 11:00 am on Friday August 2, 2019 at Erickson Crowley Peterson Funeral Home with Pastor Jared Howard officiating. Friends may call at the Erickson Crowley Peterson Funeral Home in Calumet on Friday from 10:00 am to 11:00 am.
A burial will take place in the Lake View Cemetery.
Online condolences can be left for the family at www.ericksoncrowleypeterson.com
Donations may be given in the memory of Bertha to the charity of your choice.