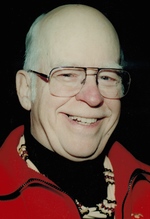 Paul Milanowski, of Dollar Bay, passed away peacefully at home at 2:40 p.m. on Sunday July 28, 2019, following a brief sudden bout with multiple cancers. That time was the precise instant a son finished reading I Corinthians 15:58, having read the entire chapter from verse 1. That concluding verse 58 had long been one of the Scripture verses Paul referenced and shared most often.
The second of three sons, Paul was born to Paul and Elizabeth Milanowski on December 10, 1928 in Halfway (now Eastpointe), Michigan. He attended the University of Michigan, majoring in aeronautical engineering, graduating in 1950 with a BSE degree. In 1948, as reserve goal tender, he was a team mate of john MacInnes on the first NCAA National Champion hockey team.
In June 1950 he went to work for Chevrolet Engineering at the experimental laboratory in Hamtramck, Michigan. Drafted in 1951, he served in the Army at Yuma Test Station, Arizona (now Yuma Proving Grounds). During that time he and Trude Seibert were married in Detroit and spent their honeymoon driving back to Yuma. Having prior to their marriage individually committed themselves to future missionary service, it was off duty ministry together among American Indians near Yuma that convinced them of the value of communicating cross culturally in the hearers heart language.
Upon his Army discharge in January 1953, Paul went back to work full time at Chevrolet, while also for three years attending Detroit Bible Institute full time. After two summers of linguistic training and acceptance into Wycliffe Bible Translators, Paul and Trude with family were assigned to commence Bible translation work among a small Athabascan Indian tribe in interior Alaska. That began in January 1959, about two weeks after Alaska became the 49th state. Paul’s longstanding challenge to himself, posted on the wall of his tiny study was, “does it glorify God?”
Seven years after Paul’s first wife Trude died, he and Lois Stout of Dollar Bay were married on September 30, 2000. For many years, they divided their time between Alaska and Dollar Bay. Both Paul and Lois were active in various Christian ministry opportunities in both places.
Paul is survived by his wife Lois, brother John (Donna) of Bloomfield Hills, Michigan; Son Paul Jr. of Tok, Alaska; Son Tim (Gloria) of Fairbanks, Alaska; daughter Grace (Tim) Rees of Kingsport, Tennessee; step-son Mark (Cheryl) Stout of Plymouth, Minnesota; and step-son Luke (jenifer) of Dollar Bay; six grandchildren; and four step-grandchildren. Paul was preceded in death by his parents, Brother Henry and his wife Carol, and first wife Trude.
The Funeral will be at Bethany Baptist Church in Dollar Bay at 3:00 p.m. Saturday, August 3rd, with visitation from 1:00-3:00 p. m. The Graveside service and burial will be in Tok, Alaska on August 17th. The Erickson Crowley Peterson Funeral Home in Calumet is assisting the family with arrangements.