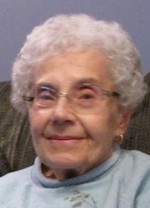 Shirley E. Simula, 88, a former resident of Mohawk passed away on Sunday December 22, 2019 at Portage Pointe in Hancock.
She was born on June 23, 1931 in Fulton to Raymond and Vienna (Taivaloja) Hepting. She attended the local schools.
Shirley worked for the Keweenaw Mountain Lodge, Gabe Oja’s Grocery store in Fulton, and then retired from Calumet Electronics.
She grew up and lived in Phoenix Farms until she was united in marriage on September 2, 1950 to Robert ”Bob” Simula. She had been Bob’s loyal caregiver for his last 12 years.

She was a homemaker and enjoyed knitting, baking and spending time at the camp in Lac La Belle.
Shirley was a member of the Laurium Apostolic Lutheran Church now known as the Laurium Shining Light Church.
She is preceded in death by her husband Bob, parents, Raymond and Vienna Hepting, 2 sisters, Shelby and Susan, and her special friend, Ray Ojala.
She is survived by:
Her son: Bruce (Paula) Simula of Ahmeek
Her daughter: Colleen (David) Rheault of Mohawk
4 grandchildren: Jon Simula, Kristina (Heath) Sundstrom, Julie Rheault and Roger Rheault.
2 great grandchildren: Jacob and Joshua Sundstrom who were the light of her life
And several nieces, nephews, and cousins.
The funeral service will be held on Thursday December 26, 2019 at 1:00 PM in the Erickson Crowley Peterson Funeral Home with Pastor Jay Weidner to officiate.
Friends may call at the funeral home from 12:00 Noon until 1:00 PM on Thursday December 26, 2019.
Burial will take place in the spring at the Lake View Cemetery in Calumet.
Online condolences can be left at www.ericksoncrowleypeterson.com
The Erickson Crowley Peterson Funeral Home in Calumet is assisting the family with the arrangements.