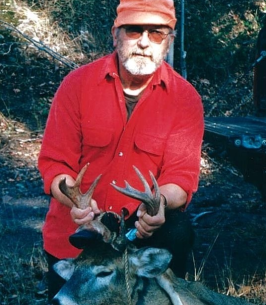 Emil E. Dyni, 75, a resident of Senter Street in Ahmeek passed away at his home on Saturday morningSeptember 5, 2020.

He graduated from Calumet High School with the class of 1963 and later attended Northern Michigan University.

Emil was a veteran having served in the U.S. Army during the Vietnam War.

On August 17, 1974 he was united in marriage to the former Bonnie Hendrickson at Faith Lutheran Church in Calumet.

Emil was employed at the Keweenaw County Road Commission for 28 years retiring in 2003.

Emil was an avid outdoorsman, hunting and fishing in the Keweenaw since he was a child. He enjoyed hunting camp with long time hunting buddies Bob Meyers, Paul Mohar, Bob Orent, and the late Joe Galinis. His favorite hunting companion was his wife, Bonnie.

Preceding him in death were his parents and a sister, Tammy Lang.

Surviving are: His Wife Bonnie