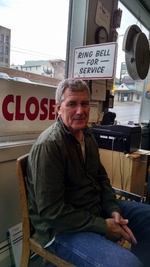 Mark Mounts,63, a resident of the Keweenaw, passed away peacefully at his home surrounded by his family on Friday November 20,2020.
He was born on April 11th 1957 in Detroit to Wayne and Dorothy (Hertz) Mountz.
He attended the locals schools and Graduated from Fitzgerald high school in Warren MI with the class of 1975.
Throughout High school Mark worked with his Father at General Glass which he purchased the family business at the age of 20. He operated
General Glass in Detorit until 1990 when he moved the busisness to Hancock.
Mark LOVED the water. He enjoyed spending as much time as possible doing various water activities including swimming, boating, fishing, watersking, scuba diving and
he even lived on a houseboat in his early years.
Mark was a member of the Keweenaw Lions Club and the Ahmeek Village and Allouez Township Fire Departments.
On April 14 2006 he was united in marriage with Joni Ely at which time he gained a loving family who adored him. He loved to spend time with his children and
grandchildren teaching them a good work ethic and how to be reverent with the land he developed. He loved spending time on his property watching the animals and
enjoying their little slice of heaven here on earth.
He is preceeded in death by his parents, his brothers, and his sister.
He is survived by
His wife Joni of Ahmeek
His children Brent (Cheryl) Sackett of Arizona, Brandi ( Aaron) Savela of Hancock, Chad (Jennifer) Ely of Calumet, Donald (Jessica) Nicely II of Calumet
and Matthew Nicely of Marquette
His Grandchildren Tyler Carlson, Alyssa Carlson, Donald Nicely III, Samantha Coon, Jaden Ely, Dominick Nicely, Wyatt Sackett, Caleb Ely, Mattyx Nicely, Aaron Savela Jr.
Haden Sackett, Tyler Smith and Rachel Smith. One Great Granddaughter Evelyn Carlson.
His brother Kenneth Mountz of Detroit and sister Margaret Mountz of Flordia.
A special niece Kris (Colin) Bulla of North Carolina along with numerous other neices, nephews and cousins.
Due to COVID-19 restrictions, a private family service will be held.
A graveside service will be held in the spring of 2021.
Online condolences for the family may be left at www.ericksoncrowleypeterson.com
The Erickson Crowley Peterson Funeral Home in Calumet is assisting the family with the arrangements