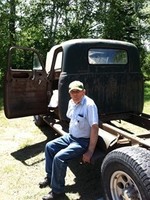 Emil A. Kinnunen, 88, passed away on Wednesday, January 13, 2021 of natural causes. As he would probably say, from being an old feller.

Emil was predeceased by his parents, Henry and Anna, his brothers Uno, Wayne, Edward, Wilho, and Donald, his sisters Hilda, Ailie, and Senia and his wife, and favorite tool passer of 55 years, Phyllis.

Those who knew Emil, knew of him as a kind, soft spoken and respectful person. He was never one to talk over another but often chose to listen ra-ther than speak. Unless it was about something old, like snowmobiles, tractors, vehicles, bottles, or local history. Then, he led many lively and entertaining conversations. Although Emil loved old things, he was also an avid reader and was very interested in current events from local to global. Anyone fortunate enough to share a cup of coffee (and a sweet) with him never knew what topic might come up. What you did know, was that you would be listened to, questions would be thoughtfully considered and, if advice was ever given, it would usually come back to you in the form of a question.

Emil is survived by his daughters, Bonny (Steve), Jackie (Chris), Barb (Troy) and son Arnie (Becky), his 4 grandchildren Jessie, Emily, Hayden and Hannah and his great grandchildren Darien and Violet.

On behalf of his family, we would like to thank all of Emil’s family and friends for the wonderful memories that he so cherished. He spoke of those he loved often and we are forever grateful for what you have all meant to him. Emil will be sorely missed but most certainly, never ever forgotten.

At Emil’s request, there will be no public services held.
Näkemiin, Pi-Pi.