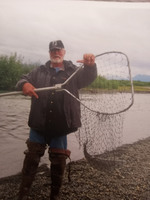 James Spehar, age 76, passed away on Friday April 8, 2022, at UP Health Systems Portage. After years spent battling Lymphoma thought to be due to exposure to Agent Orange in the Vietnam War.
James was born in Detroit, Michigan on March 6, 1946, to parents Edward and Helen (Sterbenz) Spehar. His family moved back to the Copper Country during his youth. James graduated from Calumet High School in 1964. He was drafted into the US Army in January of 1966. After 8 months of training, he served a 14-month tour of duty in Vietnam. James was honorable discharged after his tour in Vietnam. In June 2011, James married Beverley Holzberger. The two lived out the last years of his life in beautiful Gay, Michigan.
James loved the outdoors. He spent much of his life on the lake or in the woods. He enjoyed hunting and fishing. His career was working in the woods working as a logger in various logging operations, too many to mention. He worked as a self-employed logger, trucker, and road building construction.
James is preceded in death by his parents Edward and Helen Spehar.
He is survived by his wife Beverley (Holzberger) Spehar
His Children; Scott (Debbie) Dianda of Calumet MI, Jill (Steve) Auger of Houghton MI, Derek (Crystal) Holzberger of Bootjack MI, Chad (Courtney) Holzberger of Bootjack MI.
His Grandchildren; Mason and Vivienne Rose Holzberger
His four sisters; Ann (Jerry) Meyers, Kathy Beiring, Dorothy (Ed) Hallquist, Deb (Lew) Lambert.
James is also survived by numerous brothers-in-law and sister-in-laws, and nieces, and nephews.
Burial will take place in the Veterans section at the Lake View Cemetery on Friday June 24, 2022, at 11:00 am with military honors. A celebration of life will be held on Saturday June 25, 2022, at James house in Gay, MI.
In lieu of flowers please make donations in remembrance of James to either the Honor Flight, V.F.W. Post 3900 of Calumet, or the American Legion Post 90 of Lake Linden.
Online condolences may be left for the family at www.ericksoncrowleypeterson.com
The Erickson Crowley Peterson Funeral Home is assisting the Family with arrangements.