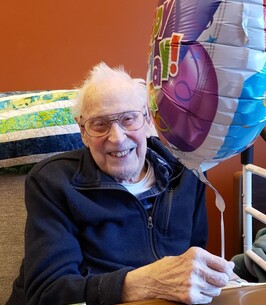 The Great Depression and WWII shaped his life. He joined the Navy on December 27, 1944 and received an early discharge when his father passed away in 1946. He continued service to his country by joining the Naval Reserve.
His father, Herman immigrated from Sweden and his mother, Ester immigrated from Finland. They opened a grocery store in Dollar Bay known as Dahl’s Market, later became Dahl Brothers Market when Roy and Toivo took over the business. The business was sold in the 1970s and Roy took a job at the Copper Country Dairy in Dollar Bay as a cheese maker.

Roy met Anna Lillian Grandchamp and married her on August 2, 1952. They had 2 children, Raymond Roy and Susan Agnes.

Roy enjoyed traveling with both of his wives and was an active member of Bethany Baptist Church in Dollar Bay. He developed a love for the game of Skipbo and taught many others how to play.

Roy was preceded in death by his parents, stepsister, brother, son, and both of his wives.

Roy moved to Grand Ledge, Michigan in March 2021 and lived with Sue and John until August and then spent the last 14 months of his life at Medilodge of Holland, Michigan. Roy passed peacefully into the arms of his Savior after 95 years on this earth on October 29, 2022.

A funeral service will take place for Roy on Thursday, November 3, 2022 at 11:00 am at Bethany Baptist Church in Dollar Bay. A visitation will be held from 10:00-11:00 am on Thursday November 3rd. Burial will follow the service.

Condolences can be left for the family at ericksoncrowleypeterson.com