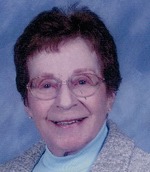 Valeda Tomasi, age 105, a resident of Calumet passed away on Monday November 21, 2016 at Gardenview Assisted Living and Memory Care in Calumet.
She was born October 23, 1911 in Laurium to Alphonse and Rosann (LaRose) Cloutier.
She attended the Sacred Heart Schools. She left school in 11th grade to help her dad run the family store after the passing of her mom. Following the death of her dad, she moved to Marquette where she began her schooling to become a Licensed Practical Nurse. She spent her nursing career working at the TB sanitarium in Hancock. She retired in 1968.
In 1942 she was united in marriage to Frank Fausone, he preceded her in death in 1965.
In 1972 she was united in marriage to Michael Tomasi, he preceded her in death in 1999.
During her time with Mike, they often traveled to Texas.
She enjoyed dancing and singing. She also loved birds. There was a bird feeder outside her window everywhere she went. She enjoyed spending time at her cottage on Lake Superior, it was there that she became an avid agate picker.
She was also a caregiver to many people.
She was a member of Sacred Heart Church, 3rd Order of St. Frances, Altar Society, Sacred Heart Church Choir, and past president of the National Catholic Society of Foresters. She is preceded in death by her parents, Alphonse and Rosann; 6 sisters, Bernadette, Aurora, Genevieve, Irene, Estelle, and Elizabeth; 1 brother, Robert; and her 2 husbands, Frank and Mike.
She is survived by:
1 Brother Francis Cloutier of Laurium
Also by Several nieces, nephews, cousins, friends. And many new friends, and staff at Gardenview who she considered as extended family.
A Funeral Mass will be held at 11:00 am Saturday November 26, 2016 at Sacred Heart Church in Calumet with Father Abraham Mupparathara to officiate. Friends may call at the Erickson Crowley Peterson Funeral Home in Calumet on Friday, November 25, 2016 from 4:00 pm to 6:00 pm. A Prayer Vigil will be held at 5:45 PM on Friday, November 25, 2016 with Deacon Art Stancher to officiate.
Online condolences for the family may be left at www.ericksoncrowleypeterson.com
The Erickson Crowley Peterson Funeral Home in Calumet is assisting the family with the arrangements.

To send flowers to the family or plant a tree in memory of Valeda Tomasi (Cloutier), please visit our Heartfelt Sympathies Store.