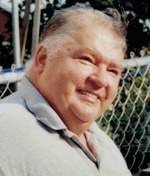 Raymond worked the majority of his career with the local mining companies. Following his mining career, Ray then went to work for McClain State Park for several years, at D & N Bank, and at Faith Lutheran Church.

He loved spending time in the outdoors. You could always see Ray fishing and hunting, and sitting out in his yard relaxing with a cup of coffee and enjoyed spending time with his grandchildren.

He is preceded in death by his wife Rose, his parents, Elwood and Mary, and 2 brothers, Carl Nelson and Gordy Nelson.

The family wishes to thank the Houghton County Medical Care Facility 3rd floor staff for the care they have given Raymond for the past 4 ½ years. Also they would like to thank Dr. Tom McConnon, Melissa Salani P.A., and Dr. Todd Anderson.
A celebration of life will be held ‪on Saturday, May 13, 2017‬ at the Siskiwit Hall, ‪26070 Pine Street, Calumet, Michigan‬ ‪from 1:00 pm to 3:00 pm‬.

To send flowers to the family or plant a tree in memory of Raymond G. Nelson, please visit our Heartfelt Sympathies Store.