In Memory of
Randall Bradley "Randy"
Thyrion
1967 - 2017
Click above to light a memorial candle. 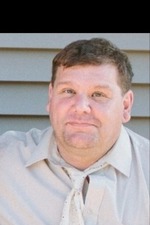 Randall “Randy” Thyrion, age 49, passed away peacefully in his sleep at home on Friday, May 5, 2017.
Randy was born to Kenneth and Sharon (Strack) Thyrion-Muotka on December 20, 1967 in Hancock.
He attended Calumet High School and played baseball, football and basketball during his school years. Randy’s strong work habits developed when he went to work at Lake Superior Fisheries at the age of 15, along side his father and uncle “Nubby”. He worked there for a little over 20 years. Eventually, Randy went into business for himself, starting, “Always Available Sewer & Drain” in 1999. Randy really enjoyed hunting, fishing and 4-wheeling in his free time, and recently discovered that metal detecting with his brother Richard was fun too. He enjoyed going on hockey trips with his son. No matter the city or the state of the hockey game, Randy made sure he was there whenever he could. He was an avid Packer fan and enjoyed football Sundays, often having get togethers for the “Yooper Bowl”. Most importantly Randy loved to spend time with his girls, most recently proving to them that he could still ride a bike! During his downtime he loved spending hours hanging out in the backyard with family, neighbors, and friends. Randy was a hard-working man who always put others first before himself.
On January 21, 2005, he was united in Marriage to Marla Hiltunen in Las Vegas, Nevada.
He was preceded in death by his Father Kenneth and Grandparents Luella & Bernard Strack, a close cousin Roger Strack, nephews Ryan & Eric Thyrion.
Surviving are his wife Marla
Son: Randall (Jamie) Thyrion of Calumet
Daughters: Nicole, Marissa, and Carly at home
Grandchildren: Nathan and Taylor Thyrion
Mother: Sharon (Arnie) Muotka of Nevada
Brothers: Kenneth (Micaela) Thyrion of California, Richard (Janet) Thyrion of Calumet
Nephews: Jordan (Jennifer) Thyrion, Brian Thyrion
Nieces: Miranda and Kaela Thyrion
And numerous other nieces, nephews, aunts, uncles, and cousins.
A funeral service will be held at the Erickson Crowley Peterson Funeral Home on Friday, May 12, 2017 at 11:00 AM with Deacon Art Stancher to officiate.
Visitation will take place at the funeral home from 4:00-8:00 PM on Thursday, May 11, and from 10:00 AM until time of service on Friday.
Burial will take place at the Lake View Cemetery in Calumet.
A luncheon will follow the service at the Siskiwit Reception Hall.
Online condolences may be left for the family at ericksoncrowleypeterson.com
The Erickson Crowley Peterson Funeral Home of Calumet is assisting the family with arrangements.

To send flowers to the family or plant a tree in memory of Randall Bradley "Randy" Thyrion, please visit our Heartfelt Sympathies Store.