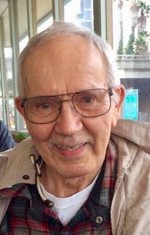 Paul Torola, 77, a former resident of Laurium passed away on Tuesday, February 20, 2018 at his home in Ventura, California.

He was born on July 15, 1940 to Rev. Walter and Aili (Harju) Torola in Laurium. He attended Calumet High School and graduated with the Class of 1958.

After high school Paul attended Michigan Tech and Ferris State. Paul enlisted in the United States Army, following his service in the U.S. Army, he enlisted with the U.S. National Guard.

Paul was an avid Chess player. He also enjoyed living in California, and enjoyed touring on his trike.

He was a member of the First Apostolic Lutheran Church.

He was preceded in death by his parents, Walter and Aili Torola, his sister, Eva Torola, and his brother, Peter Torola.

Also surviving are many nieces, nephews, and also cousins in Canada and Finland.

To send flowers to the family or plant a tree in memory of Paul Torola, please visit our Heartfelt Sympathies Store.