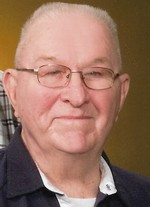 May 3, 2018
Jack R. Krans, 91, a resident of Calumet passed away peacefully on Thursday morning May 3, 2018 at Aspirus Keweenaw Hospital in Laurium with his family by his side.  Jack was a former resident of Lake Linden and Bootjack.

Jack attended Calumet High School but, before graduating enlisted in the U.S. Army serving his country as an M.P. during WWII in the Pacific.

Jack worked as a route driver for Thurner’s Bakery in Calumet before going to work for Standard Oil Company. With his wife at his side he formed Krans Oil Co. in 1976 and they operated the business together until retirement in 1992.  Jack was fondly known as  “Fuel Oil Phil”.

Jack was a loving husband and father and worked hard caring for his family.  He was an avid golfer and bowler. His favorite place to be was at the lake or on the pontoon boat in Bootjack. He enjoyed watching the Detroit Lions, Tigers and Red Wings.

Jack was very outgoing and would immediately light up any room he entered.

Funeral services will be held on Monday May 7, 2018 at 11:00 AM at St. Paul Evangelical Lutheran Church in Laurium with Rev. Bryan Lundquist to officiate.

Visitation will be held on Sunday May 6, 2018 at the Erickson Crowley Peterson Funeral Home in Calumet from 4-7 PM and one hour prior to the funeral at the church on Monday.

Burial will be in the Lake View Cemetery.

To send flowers to the family or plant a tree in memory of Jack R. Krans, please visit our Heartfelt Sympathies Store.